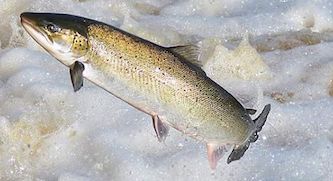 Around 360,000 salmon and 20,000 sea trout have been released into tributaries of the River Tyne this year as the UK Environment Agency’s Kielder Salmon Centre in northern Northumberland marked its 40th anniversary.

The centre was built in 1978 to compensate for the building of Kielder Reservoir – the biggest man-made lake in Northern Europe – which cut off around 7% of the River Tyne catchment including some of the best spawning streams for salmon.

Hatchery manager Richard Bond said: “Over the 40 years we have released millions of salmon and sea trout into the River Tyne’s tributaries to compensate for the fact they cannot reach their natural spawning grounds.

“We just give them a helping hand, and it helps to contribute to the now thriving River Tyne.

“The river has gone from being heavily industrialised to one which is now one of the best salmon rivers in the country.

“It is a real success story and one which has happened for a number of reasons, predominantly due to improvements in water quality as well as work by ourselves and our partners to make improvements to fish passage and habitat.”

The recovery of River Tyne salmon stocks started in the late 1960s and coincided with improvements to estuarine water quality and was helped by changes to environmental legislation, changing attitudes to conservation and a decrease in industrial pollution.