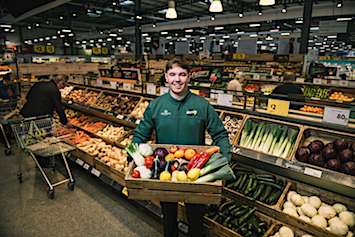 Bradford-based supermarket group Morrisons said it will become the first British supermarket to introduce plastic-free fruit and vegetable areas in many of its stores.

Customers will be able to buy fruit and veg loose or put them in recyclable paper bags.

The move follows a 10-month trial in three Morrisons stores in Skipton, Guiseley and St Ives where the amount of loose fruit and veg bought by customers increased by an average of 40%.

The new ‘buy bagless’ fruit and veg shelves are expected to result in a similar switch from bagged to loose — saving an estimated three tonnes of plastic a week, equating to 156 tonnes a year.

Morrisons said: “This is the latest announcement from Morrisons – which made changes that will remove 9,000 tonnes of unnecessary or problematic plastic each year.

“A further 1,300 tonnes of plastic will be removed as a result of the launch of paper carrier bags this month.

The loose fruit and veg areas will be rolled out in 60 Morrisons stores during the course of 2019.

“They will then continue to be introduced as part of the supermarket’s ongoing store refurbishment programme nationwide – saving even more plastic over time.”

Drew Kirk, Fruit and Veg Director at Morrisons said: “Many of our customers would like the option of buying their fruit and veg loose.

“So we’re creating an area of our greengrocery with no plastic where they can pick as much or as little as they like.

“We’re going back to using traditional greengrocery and we hope customers appreciate the choice.”