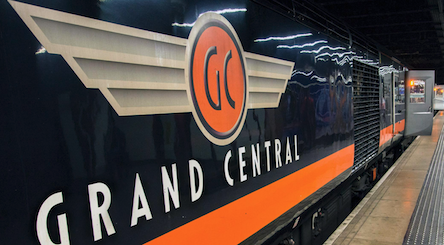 Train operator Grand Central — part of Deutsche Bahn’s Sunderland-based Arriva group — confirmed on Monday that its plans to run frequent trains between Blackpool and London from Spring 2020 are “firmly on track.”

Five new direct train services will run every day of the week between Blackpool North and London Euston.

“These InterCity services were approved in June 2018 by the Rail Regulator, the Office of Rail and Road,” said Grand Central.

“In a move which is expected to bring significant economic benefits to the North West, including a boost to tourism, Grand Central will operate up to five new direct train services to run every day of the week between Blackpool North and London Euston.

“Blackpool will gain direct services to London on Sundays as well as later trains to and from the capital Monday to Saturday.

“Poulton-le-Fylde and Kirkham & Wesham will each have new direct London services throughout the day, seven days a week.

“All trains will also call at Preston and Nuneaton, with most stopping additionally at Milton Keynes, connecting leisure and businesses travellers to the capital and offering a choice of operator along with low cost fares.”

“For more than a decade, we have been dedicated to making travel affordable and enjoyable for people in the North East and across Yorkshire.

“This new chapter opens up these opportunities to the other side of the Pennines and beyond, ensuring rail remains relevant and accessible to as many people as possible.”