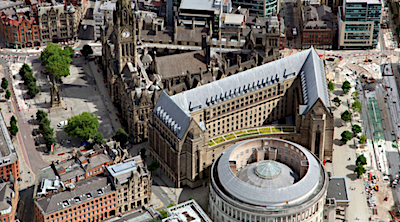 Shares of Manchester-headquartered international law firm DWF Group plc rose about 6% on Tuesday after it published a strong trading update for the first quarter ended July 31 at the same time as it released results for the year ended April 30 that were impacted by COVID-19.

“In addition to proposing a final dividend for FY20, moving forward the board remains committed to its stated dividend policy of a payout ratio of up to 70% of adjusted profit after tax,” said the firm.

Total proposed dividend for the year is 3.25p per share.

DWF Group CEO Nigel Knowles said: “Trading through the majority of FY20 was strong and the group made significant investments to support its growth objectives.

“The sudden and far reaching impact of COVID-19 had a material effect on the final quarter with a resulting impact on profitability.

“Despite this, we delivered a solid performance with overall revenue growth of 10.9% and organic growth of 2.0%.

“While we achieved record group revenue, with an organic growth rate that compares to other global law firms in FY20, it was lower than expected.

“The strength and resilience of the group and our differentiated model has been evident in the first three months of FY21.

“We have seen strong activity levels generating positive momentum across the business resulting in revenue and EBITDA being materially ahead of the prior year.

“Measures to scale-up managed services and optimise the international division will position DWF well for FY21 and beyond.

“Having spoken with many of our stakeholders, I am very pleased that our new focus has such strong support and remain positive about DWF’s future prospects.”