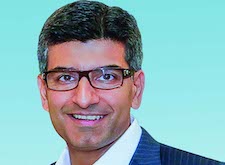 Shares of Liverpool-based FTSE 100 firm B&M European Value Retail fell as much as 7% on Friday after it announced that CEO Simon Arora intends to retire in 12 months’ time after over 17 years of leading the business.

In January, SSA Investments, the investment vehicle of the Arora family, announced its intention to sell 40 million ordinary shares of B&M worth about £238 million, reducing the vehicle’s stake in the firm from 11% to 7%.

B&M is based in Liverpool and registered in Luxembourg — but its shares trade in London, where its stock fell 7% to around £5.14 to give the firm a current stock market value of about £5.1 billion.

“B&M was a regional chain of only 21 stores when it was acquired by Simon and Bobby Arora in December 2004,” said B&M.

“Since then, it has grown into a group today of over 1,100 stores across the UK and France and is now a constituent of the FTSE100 index.

“Having firmly established a strong, entrepreneurial culture and built a talented and experienced senior management team, Simon wishes to plan for retirement.

“Bobby Arora, group trading director, intends to remain with the business in his current role.

“Over the coming year, Simon will remain fully committed to the business in his role as chief executive officer, in particular to assist in a smooth transition to his successor.

“A succession process, led by chairman Peter Bamford, will consider both internal and external candidates and a further announcement will be made when appropriate.”

Bamford said: “On behalf of the board and all stakeholders of the group, I would like to thank Simon for his leadership over the past seventeen years.

“The remarkable growth of the business from its humble beginnings to where it is today reflects his exceptional passion, determination and ability.

“Moreover, he has established a firm foundation from which the group will continue to deliver its successful growth strategy and great value for its customers.

“We are all very grateful for his tireless efforts and he will leave us next year with our best wishes for the future.”

Simon Arora said: “It has been a privilege to lead B&M for seventeen years and I am immensely proud of the incredible journey that we have been on.

“B&M’s value for money proposition remains as relevant and compelling to shoppers today as it has ever been.

“I would like to thank all 38,000 members of the B&M family for their hard work and commitment both now and as we continue our expansion.”

AJ Bell investment director Russ Mould said: “Only two FTSE 350 retailers are sitting on a higher share price versus the start of January – that’s Vivo Energy which is in the process of being taken over and the other is WH Smith which is enjoying a recovery in travel activity and has a surprisingly resilient high street operation.

“The share price movements tell you what the market thinks about the consumer spending outlook. It’s easy to cut back on items like greetings cards and clothes, as evidenced by big declines in the shares of Moonpig and Marks & Spencer.

“The home improvement revival seen throughout the pandemic is at danger of losing momentum, with B&Q owner Kingfisher down by a fifth and homewares sellers Next and Dunelm also falling a lot. We all stocked up on laptops and new TVs during lockdown, so Currys might find it harder in the coming months to keep growing sales.

“But the one company that stands out from the crowd is B&M European Value which is down nearly 18% year to date. One might have thought cash-strapped consumers looking to save money would trade down to cheaper items which would benefit value retailer B&M, but the stock market clearly disagrees.

“So, is chief executive Simon Arora getting out before everything turns ugly?

“News that he will leave the business in 12 months’ time is perhaps not a complete surprise given his family investment vehicle SSA sold £234 million worth of shares in B&M three months ago. That was a signal that Arora was thinking about the future and one that perhaps was less hands-on than his current role.

“He has run the business for the past 17 years and made it one of the biggest modern success stories in UK retail.

“The 5% share price decline on news of his forthcoming departure goes to show that the market doesn’t want him to go, although one must also factor in the latest retail sales figures as weighing further on the share price.

“The ONS’ retail sales data is a wake-up call that life is going to be tough for shops – virtual or physical – in the coming months.”