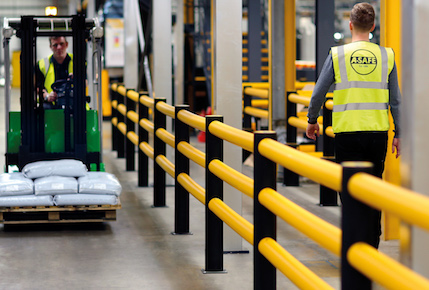 Yorkshire safety barrier manufacturer A-Safe is set to expand overseas thanks to an eight-figure funding package from HSBC UK.

A-Safe designs and manufacturers safety barriers at its Elland headquarters, supplying car parks, airports, factories and warehouses across Europe, US, Asia and the Middle East.

Its products are used across many industries by companies including Coca-Cola, DHL, Toyota, Jaguar Land Rover, IBM.

With the backing of HSBC UK, the firm has upgraded its 75,000 sq. ft. factory by purchasing new German and Austrian-made machinery, allowing it to scale-up production by up to 40% — and reduce waste.

Further, A-Safe is taking steps to boost its presence in Italy by commissioning a new distribution centre in Milan.

The new site is scheduled to be completed in 2020 and will allow the business to react quickly to large orders from customers across Europe.

A-Safe anticipates that the investment will create 50 new jobs at its Elland manufacturing facility in the next 12 months.

“We never stand still, and we’re now ramping up production of our next generation safety barriers and introducing them to markets around the globe.

“This is an exciting time for manufacturing and we look forward to seeing the business create a significant amount of jobs in the region.”