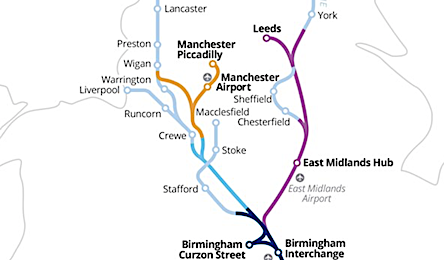 Plans to extend the UK’s new railway — High Speed Two — moved a step closer on Wednesday with the opening of a new public consultation on the latest proposals for the railway which include “design refinements” in the Manchester area .

“Communities are encouraged to have their say on a series of proposed design refinements, which show how the route from Crewe to Manchester (known as the Phase 2b Western leg) is progressing to fully integrate with plans for Northern Powerhouse Rail (NPR) and the wider transport network,” said HS2.

“The consultation focuses on four proposed modifications to the current design of the Phase 2b Western leg and outlines technical changes and expansion plans to both Manchester Airport and Manchester Piccadilly High Speed Stations.

“The changes fully support the vision for HS2 and NPR becoming the new backbone of Britain’s national rail network.

“Collectively, HS2 and NPR will increase capacity on the rail network and improve connections between the UK’s biggest cities and regions, while generating thousands of jobs and boosting economic growth across the Midlands and the North.”

Communities in Cheshire and Greater Manchester are being asked to give their views on a series of design refinements for Manchester Airport High Speed Station, including:

“This forward-thinking approach aligns to the Government’s vision to significantly improve capacity, connectivity and reliability of the rail network across the North as quickly as possible.”

Leonie Dubois, HS2’s Head of Consultation and Engagement said: “Our latest consultation demonstrates that we’re a step closer to extending Britain’s new railway from Crewe to Manchester, improving connectivity to the North and delivering on the vision for a cleaner, greener transport network .

“Local communities have an important role to play in informing the final design of the railway and I encourage them to take the time to respond to these proposals”.

Consultation documents, which provide a detailed account of the proposed changes, are available online at https://www.gov.uk/government/consultations/hs2-phase-2b-western-leg-design-refinement-consultation.