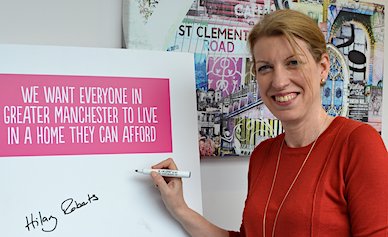 Greater Manchester affordable housing firm Jigsaw Homes Group said it has secured a bond to help its ambitious plans to build thousands more new homes over the next few years.

Jigsaw Funding plc, part of the group, successfully issued a £360 million 30 year bond, which will be used to build around 3,500 homes for social and affordable rent by 2026.

Jigsaw Homes Group CEO Hilary Roberts said: “The level of investor engagement and oversubscription we received reflects our standing as one of the sector’s leading housing groups.

“Investors were attracted to our robust financial and operational performance, our track record as an established developer with a strong management team and clear commitment to sustainability.

“This will enable us to deliver more high quality and energy efficient homes.”

On April 22, Moody’s Investors Service assigned an A2 senior secured debt rating to Jigsaw Funding plc, as well as a stable outlook.

“The proceeds from the proposed sustainability bond of up to GBP350 million issued by Jigsaw Funding plc will be used in accordance with the group’s Sustainable Finance Framework which outlines eligible projects including construction of affordable housing and improving the energy efficiency of existing homes.

“It also incorporates the anticipated weakening of Jigsaw’s debt metrics over the next few years.

“Jigsaw has delivered consistently strong financial performance since its merger in April 2018, driven by the high profitability of its core social housing lettings portfolio which had a margin of 41% in FY2021.

“Moody’s expects Jigsaw’s operating margin to stay above 30% over the next three years, benefitting from inflation-linked rent increases, conservative budgeting and its continued focus on social housing lettings.

“Jigsaw has limited market sales activity, as the housing association develops only shared ownership units, which represent only around 5% of annual turnover.

“The affirmation of Jigsaw’s issuer rating also reflects the group’s development programme which aims to build 800 units per year, with net capital expenditure to average 43% of turnover over FY2022-2024, from 14% in FY2020.

“The increase in net capital expenditure also includes retrofitting costs as Jigsaw aims to improve its energy efficiency by reaching Energy Performance Certificate of C on all its dwellings by 2030 and by reaching net-zero carbon for the organization by 2050.

“Despite the anticipated increase in spending, Jigsaw will maintain strong liquidity coverage thanks to its liquidity policy.

“Jigsaw’s debt is set to increase significantly in FY2023 to fund Jigsaw’s development and retrofitting plans.

“The increase will weigh on Jigsaw’s debt and interest metrics over the next two years, with debt to revenue peaking at 4.7x in FY2023 from 3.6x in FY2021.

“However, Jigsaw’s gearing (debt to assets at cost) remains in line with peers owing to the group’s strong balance sheet and ability to secure capital grants.

“Gearing is anticipated to peak at 51% by FY2025, compared to 50% for the A2-rated peer median the same year. Jigsaw’s unencumbered asset position will be low after the bond issuance, a credit challenge for the group.

“Jigsaw’s Baseline Credit Assessment (BCA) of a3 was also affirmed.

“As per the application of Moody’s Joint Default Analysis for Government-Related Issuers, the final rating of A2 incorporates Moody’s assessment of a strong likelihood of support from the United Kingdom government (Aa3 stable).”