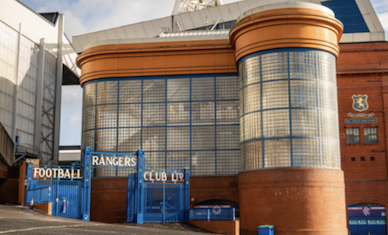 If confirmed, the companies involved can expect to face fines.

JD Sports said it intends to recognise a provision of £2 million in its financial statements for the 52 weeks to January 29, 2022, representing its “best estimate of the liability payable in respect of this matter, including associated legal costs.”

The finding from the CMA is provisional and the companies involved now have the chance to make representations to the CMA before it reaches a final decision.

The CMA said its provisional findings are:

“At the time, Elite was the manufacturer of Rangers-branded clothing and also sold Rangers-branded products directly through Gers Online Store and later in bricks-and-mortar shops in Glasgow and Belfast,” said the CMA.

“The only UK-wide major retailer selling those products at the time was JD Sports.

“The Competition and Markets Authority (CMA) alleges that Rangers FC became concerned about the fact that, at the start of the 2018-19 football season, JD Sports was selling the Rangers replica top at a lower price than Elite, which was seen at the time as the club’s ‘retail partner’.

“This resulted in an understanding between the 3 parties that JD Sports would increase its retail price of the Rangers adult short-sleeved home replica shirt by nearly 10%, from £55 to £60, to bring it in line with the prices being charged by Elite on Gers Online.

“The CMA is also concerned that Elite and JD Sports – without involvement from Rangers – colluded to fix the retail prices of Rangers-branded clothing, including training wear and replica kit, over a longer period.

“This included aligning the level and timing of discounts towards the end of the football season in 2019, to avoid competition between them and protect their profit margins at the expense of fans.

“Elite and JD Sports applied for leniency during the CMA’s investigation and confessed to cartel activity.

“Provided they continue to cooperate with the investigation, each will receive a reduction on any financial penalties the CMA may decide to impose.

“Any business found to have infringed the prohibitions in the Competition Act 1998 can be fined up to 10% of its annual worldwide group turnover.”

Michael Grenfell, Executive Director of Enforcement at the CMA, said: “We don’t hesitate to take action when we have concerns that companies may be working together to keep costs up.

“Football fans are well-known for their loyalty towards their teams.

“We are concerned that, in this case, Elite, JD Sports and, to some extent, Rangers, may have colluded to keep prices high, so that the 2 retailers could pocket more money for themselves at the expense of fans.”

“JD can confirm that it has, today, also received a Provisional Statement of Objections and a Draft Penalty Notice from the CMA.

“The CMA’s findings are, at this stage, only provisional and the group will now review them with its advisers.

“The CMA will consider any representations that are made before issuing its final findings.

“As the CMA has noted, JD has co-operated fully with the CMA and, provided this continues, JD will receive a reduction on any financial penalties that the CMA may decide to impose.

“Based on the information available to it at this time, the group intends to recognise a provision of approximately £2 million in its financial statements for the 52 weeks to 29 January 2022 representing the group’s best estimate of the liability payable in respect of this matter, including associated legal costs.

“The group expects to release its final results for this period, incorporating this provision, shortly.”

“Football kits are pricey items but for some supporters they’re must haves and parents in particular wince every time an update is unveiled.

“Competition is supposed to keep those prices in check and the competition watchdog has said it will come down hard on companies that ignore the spirit of fair trade in order to make a bit of extra cash.

“JD sports has set aside £2m to cover any fines and legal costs it may incur if it’s found to have broken the law.

“It has cooperated fully with the CMA during the investigation, something which is expected to impact the size of any fine they might face.

“But the bad press couldn’t come at a worse time for JD Sports.

“Still bruised from the failed takeover of Footasylum, and the departure of its long-time boss Peter Cowgill, shares have plunged almost 44% since the start of the year.

“At a time when consumers are having to make tough choices about where to spend their dwindling spare cash, retailers need to stand out for the right reasons.

“Shoppers have become incredibly savvy; they will penalise businesses for bad practice.

“JD Sports is trying to step forward but now finds itself on the back foot. It will need to think carefully about how it engages with the consumer going forward.

“Football is supposed to be the ‘beautiful game’ but there’s nothing beautiful about this particular chapter and Rangers fans will be galled that the club itself seems to have played a small part in the episode.

“Fans and shareholders will scrutinise any response to the allegations from the three parties involved before a final ruling is made.”