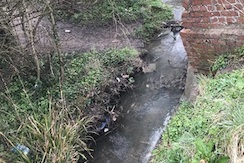 Yorkshire Water has agreed to donate £400,000 to Yorkshire Wildlife Trust after polluting two watercourses in separate incidents, according to the UK’s Environment Agency.

“It submitted two Enforcement Undertakings to the Environment Agency, which have now been accepted – £150,000 for the Holgate Beck incident and £250,000 for Hoyle Mill Stream.

“An Enforcement Undertaking is a voluntary offer made by companies and individuals to make amends for their offending, and usually includes a donation to a wildlife charity to carry out environmental improvements in the local area.

“Bellhouse Way Sewage Pumping Station has an environmental permit to discharge sewage into Holgate Beck in emergencies, which does not include storm conditions and heavy rain.

“At the start of April 2018 it discharged sewage intermittently due to an electrical failure in the main pump and blockage of the standby pump.

“The alarm on the pumping station was activated, but as this coincided with a period of heavy rain it was not differentiated from other assets which are allowed to discharge during storm conditions.

“As part of the Enforcement Undertaking requirements Yorkshire Water has improved its monitoring systems so that assets which are permitted to discharge in an emergency only are allocated a code to ensure they are always investigated. This code has been allocated to 670 assets across the county.

“On 3 August a repair that had been made to the rising main failed and more raw sewage was discharged into the beck.

“Further investigation revealed the pipe was severely corroded and the repair was not sufficient to sustain the pressure. As part of the Enforcement Undertaking, Yorkshire Water replaced the whole rising main at the end of last year.”

Martin Christmas, Environment Agency Area Environment Manager, said: “We are holding water companies to account like never before and while we will always take forward prosecutions in the most serious cases, Enforcement Undertakings are an effective enforcement tool to allow companies to put things right and contribute to environmental improvements.

“They allow polluters to correct and restore the harm caused to the environment and prevent repeat incidents by improving their procedures, helping ensure future compliance with environmental requirements.

“As well as donations totalling £400,000 to Yorkshire Wildlife Trust that will bring great benefits to the environment, Yorkshire Water has made significant improvements to its monitoring system and completed repairs to its assets as part of the civil sanction.”

Yorkshire Wildlife Trust will use the donations on environmental improvements such as its Askham Bog, River Foss and Living Went projects.

“In February this year, they paid £300,000 to Yorkshire Wildlife Trust in an Enforcement Undertaking after it breached its environmental permit due to an unauthorised discharge from its Garforth Storm Tanks.”