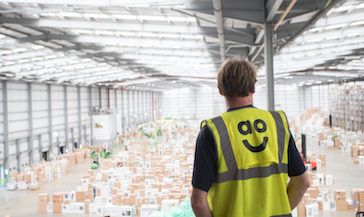 Shares of Bolton-based online electrical retailer AO World plc rose about 13% on Thursday after it announced results for the year to March 31, 2022 — but the firm’s shares are still down about 80% for the past year.

AO reported a statutory loss before tax of £37 million compared to a £20 million profit in the prior year.

In its outlook, AO said trading through the first quarter of FY23 has remained broadly in-line with the board’s expectations.

AO founder and CEO John Robert said: “The past 12 months has been a turbulent time for business and for retail in particular, and AO hasn’t been immune to those effects.

“Looking ahead, we certainly have more volatility to navigate, but the core fundamentals of our business remain strong.

“We entered the new financial year with a period of strategic realignment, and a focus on cash and profit generation.”

Richard Hunter, head of markets at Interactive Investor, said: “AO World has endured a torrid year, buffeted by the economic headwinds which have blown across the retail sector, as well as labour shortages and supply chain disruptions.

“The stock was also hit earlier this year by reports of credit insurance being closed to its suppliers and the company subsequently entered a fundraising exercise of £40 million in an effort to shore up the balance sheet.

“Throughout the release, management mood is defiantly upbeat, pointing to a 52% increase in revenues over the last two years, an additional four million customers since the beginning of the pandemic, and a strategic shift which involves an expansion into a larger addressable market, including laptops, televisions and small domestic appliances.

“In addition, a growing installation and recycling service competes the strategic shift.

“The loss of the German business, where customer returned to pre-pandemic behaviour more quickly than expected (and therefore less reliant on online shopping) will result in revenues which accounted for 12% of the group total.

“More broadly, group revenues for the last year fell by 6%, and the resultant pre-tax loss of £37 million compares with a profit of £20 million in the previous period.

“The company now enters into a new phase after a bruising time.

“Over the last year, the shares have declined by 82%, as compared to a marginal 0.6% gain for the FTSE All-Share index, and the market consensus of the shares as a hold reflects a wait and see approach as the company attempts a revival.

“In the meantime, vague bid speculation has not materialised into anything concrete, although the suspicion remains that potential suitors may still be running the slide rule over the company.”