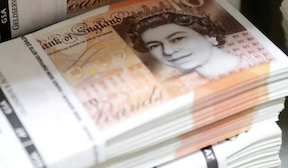 Sterling rallied on Thursday as Liz Truss said she would resign as UK prime minister after 44 days of chaos.

Truss was brought down by her economic programme that sent shockwaves through the bond and capital markets and seriously damaged her Conservative Party.

Truss’s programme contained £45 billion of unfunded tax cuts and it caused turmoil in the sterling and gilt markets.

Conservative MPs will now choose the UK’s third prime minister in a matter of months.

Truss will go down in history as the UK’s shortest-serving prime minister.

Stuart Clark, portfolio manager at Quilter Investors: “While Liz Truss’ resignation can draw a line under the unsettling policies, U-turns and shambolic operation of the latest government, there will, rightly so, be calls for a fresh election in order to validate the future direction of U.K. government policy.

“A rushed process to elect a new leader and proceed with the Autumn statement will not allay concerns and anything short of a fresh mandate is unlikely to assuage international concerns about the stability of the U.K. government.

“This unfortunately will continue to act as a further headwind to unleashing the opportunities that exist within the economy and stock market. The UK equity market has been beaten up and could be considered attractive for investors at current valuations.

“However, with political risk becoming further embedded into the system, investors are going to have to wait before it becomes viable once again.

“One silver lining we are seeing is the gilt market and sterling reacting positively to Truss’ departure. This, coupled with the Deputy Governor of the Bank of England’s comment that the bank may not raise rates as high as the market expected, does provide a steadying feeling following the volatility of the last few weeks.

“However, fiscal policy is still very much up in the air, and with inflation continuing to ravage consumers’ incomes, the economic picture still looks challenging and will for some time, regardless of who sits in No.10.”

Daniel Mahoney, UK Economist at Handelsbanken: “UK financial market reaction to Liz Truss’s resignation today has been fairly sanguine: at the time of writing, Sterling has risen slightly against the Dollar and yields on 10 year gilts have remained roughly flat on the day.

“This highlights that, after the pivot on fiscal policy announced by Jeremy Hunt, the following political troubles facing the Prime Minister were fairly inconsequential to markets.

“However, going forward, markets will be seeking political stability from the UK Government and will now be looking for a new leader to be selected both speedily and with a broad consensus of parliamentary colleagues …

“Retaining the confidence of markets will be a critical objective for the new administration and achieving this will pose significant political challenges to the new Prime Minister, especially on fiscal policy.

“After election of a new Prime Minister, the next key event will be on 31st October when the Chancellor will announce a full financial statement.

“The Office for Budget Responsibility will be conducting analysis alongside this statement, and it is widely thought that a combination of further tax and spending changes will be required to meet the fiscal rule of a falling debt-to-GDP ratio by the end of the parliament.”

William Marsters, Senior UK Sales Trader at Saxo: “The pound has spiked following the Prime Minister’s resignation speech as the market can take some temporary confidence that there will be no more outlandish Truss-like economic policies. Liz Truss stepping down signals an end of a catastrophic few weeks with the economy being beaten down by the now former PM’s ‘growth plan’.

“Though many will be glad to see the back of Trussenomics, the announcement of a Tory leadership contest next week leads to more uncertainty on who could be next in No.10.

“Sterling’s game of snakes and ladders is far from over, yet it’s unlikely GBP will show many signs of long-term recovery. The economy is likely to continue to suffer at the hands of rising inflation, which has led to crippling everyday costs affecting households and businesses up and down the UK, reiterated by yesterday’s stubbornly high CPI announcement.”

Shevaun Haviland, Director General of the British Chambers of Commerce: “Following weeks of chaos and uncertainty, the Prime Minister has resigned. Her resignation means the UK now faces even greater uncertainty, just as it stands on the cusp of a recession.

“It is now vital the Conservative Party speedily comes to a decision on a new leader who can return both political and economic stability.

“The new administration must immediately set out how they plan to deal with soaring energy bills, labour shortages, spiralling inflation and interest rates.

“Flip-flopping on policies has led to low consumer and business confidence, with four in 10 firms expecting falling profits, as companies have seen little sign of a coherent strategy nor stability in Government decision making.

“The challenges that lay ahead of us are building by the day. Two thirds of firms expect to raise their prices and inflation is the top concern. Interest rates are set to climb further in November and energy bills will now rocket again for many in April.

“This is unsustainable. Government must work with business to address three main issues, to show it recognises the challenges firms face.

“Firstly, they must look again at the energy support package for businesses and communicate quickly how the system will work from April.

“Secondly, they must fix the labour market, without the skilled people to do the jobs businesses need, the economy cannot thrive.

“Thirdly, to grow the economy they must set out a strategy to boost our exports.

“People run businesses and businesses rely on people. The new administration must grasp that the cost of living and cost of doing business crises are two sides of the same coin.

“We still need a clear long-term vision on how it will support firms, and the communities that rely on them, to thrive.”

deVere Group CEO Nigel Green: “Markets are unforgiving. We have seen this in recent weeks when the pound hit historic lows against the dollar, gilt yields jumped, and stock markets dipped due to reckless economic policies set out by the Truss government.

“I fear that market volatility will not be over despite the resignation of Liz Truss, whose leadership campaign lasted 10 days longer than premiership.

“Investors know that the political chaos that has defined the UK throughout 2022 is nowhere near over, and this fuels uncertainty and drives turbulence in financial markets …

“Investors will look at the facts.  In the last four months alone, the UK has had four chancellors, three home secretaries and two prime ministers.

“Now there will be a third PM who will put in place his or her own cabinet.

“Currently, there’s 10.1% inflation with a stranglehold over households and business, and there is no functioning government.

“To investors, the UK looks ungovernable, and its economy resembles that of an emerging market, not a G7 nation …

“There will be a relief rally in markets now that Truss has confirmed her departure, it will be short-lived as political upheaval remains.

“The pound, gilt markets, amongst others, will remain under pressure for the foreseeable future …”

Victoria Scholar, Head of Investment, Interactive Investor: “After an embarrassing series of blunders on the economy, she has become the shortest serving prime minister in British history.

“Her downfall comes after the departure of two of her most senior ministers; former Chancellor Kwasi Kwarteng was sacked after his disastrous mini-budget sparked chaos across financial markets and her home secretary Suella Braverman suddenly and unexpectedly resigned yesterday.

“The sequence of events over the last six weeks has created serious damage to the Tory Party, particularly to its long-held reputation for economic competence. Although Chancellor Jeremy Hunt has managed to reinstate some economic credibility, there is still a long way to go before political credibility is restored.

“The pound is trading higher, attempting to climb back up its 2-week highs logged earlier this week as investors cheer Truss’ departure and the potential for a more economically savvy, market friendly leader. Sterling’s strength is weighing on the FTSE 100 with its major UK exporter stocks like Diageo and CocaCola languishing near the bottom of the UK index.

“There is still plenty of caution towards the UK as an investment destination given the ongoing political uncertainty, the growing risk of recession and Britain’s persistent inflation problem with price levels hovering at 40-year highs.

“Focus among investors now shifts to the leadership election, the Chancellor’s medium-term fiscal plan on 31st October and the Bank of England’s rate decision in early November.”

Andrew Megson, CEO of My Pension Expert: “Truss’ reign as Prime Minister has caused a tremendous amount of damage in a short space of time. Her vision was for the UK to punch its way out of trouble, going all-in on growth and productivity to fend off the cost-of-living crisis and impending recession. Unfortunately, she has merely piled more financial worries onto households across the country.

“Financial markets have been put in a spin by wayward economic policy. Inflation is back above 10% and likely to rise further when the now only six-month price cap ends in Spring 2023. And the Bank of England has said that interest rates will rise faster than expected as it seeks a degree of stability.

“Financial planning has been made very challenging. Take the multiple U-turns over the triple-lock pension – will the Government commit to it or not? How can people map out their financial futures with such inconsistency?

“We can only hope that Truss’ replacement can quickly bring about calmness, clarity, and certainty, allowing people to effectively plan for the future. In the meantime, it is important that those worried about their finances, whether that is unmanageable debt, the performance of investments or their retirement strategies, seek out advice and support.”