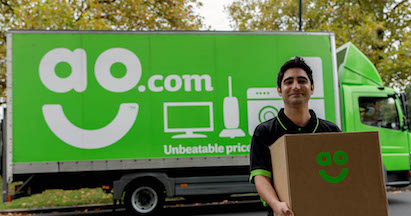 Shares of Bolton-based online electrical retailer AO World plc rose about 16% on Tuesday after it said the six months to September 2022 represented “solid progress in the plan to pivot the business to focus on profit and cash generation.”

As a result, AO World said FY23 sales are forecast to be within the range guided, FY23 profit is now expected to be around the top end of previous guidance, and guidance for FY24 has been set above current consensus.

That’s despite the firm’s statutory loss before tax widening to £12 million from £4 million during the six months and revenue falling 17% to £546 million.

AO World shares are down about 50% for the past 12 months.

AO founder and CEO John Roberts said: “During the first six months of the year, we‘ve made good progress with our strategic realignment as we focus on profitability and cash generation, all of which is yielding the results we expected.

“We‘ve now closed the loss making and cash consumptive parts of our operations meaning the remaining UK business is cash generative, and are successfully closing our German business with a minimal cash impact to the wider group.

“I‘m pleased with this progress, particularly against the backdrop of an extraordinarily difficult macro-economic climate …

“While the short-term outlook remains challenging, I‘m confident that our strategy is the right one, and as we position ourselves to be the UK‘s most trusted electrical retailer we look to the future with cautious optimism.”

Richard Hunter, head of markets at interactive investor, said: “AO World’s decision to change tack will not result in overnight success, but the early indications are that the company has made the right choices.

“In particular, the decision to exit the German business and focus on its home market in the UK is likely to result in no cost to the business, versus original estimates of up to £15 million.

“At the same time, non-core and less profitable lines have been shelved, including some third party tie-ups where the relationship was not progressing as expected.

“These measures, alongside a rapidly shrinking overall electricals market, have inevitably weighed on revenues, which are down by 17% in the period. In addition, the company’s decision to reduce cashback initiatives and introduce delivery charging have also had an indirect impact.

“Despite these changes, the company is reporting growth of 36% in the UK compared to pre-pandemic, although a resultant pre-tax loss of £12 million compares with a loss of £4 million previously. As such, the current focus on profitability and cash generation means that the payment of a dividend, for example, remains a low priority.

“Supply chain disruptions remain a factor, but the overarching issue is that the consumer is increasingly battening down the hatches, such that discretionary spend on the products which AO World provide becomes the exception rather than the norm.

“Against such a parlous backdrop, the group is squeezing its advantages wherever possible. Alongside its core retailing business, AO World offers ancillary services such as the installation of new products and the recycling of old ones, in an overall addressable market in the UK which the company believes to be in excess of £23 billion.

“Costs are also under sharp focus, and the group expects annual savings of up to £30 million in the next couple of years. Meanwhile, cash generation has enabled the reduction of net debt from £33 million to £19 million, as the group retrenches and refocuses its efforts.

“The addition of over 400,000 new customers is an indication that the new strategy is having some early success, particularly against a lower marketing spend such as through TV.

“Indeed, the focus on cash generation has effectively resulted in a profits upgrade. AO World expects profits in the current year to be at the top end of its guidance, while for next year profit is expected to land above the current consensus.

“The swift and decisive actions which the company has taken in shifting its strategy have been recognised by the market, and the shares have enjoyed a rally of 30% over the last three months.

“However, the more pressing concerns of a deteriorating economic backdrop, consumer retrenchment and a shrinking electricals market remain central to the investment case and over the last year, the shares are still down by 60%, as compared to a decline of 2% for the wider FTSE All-Share.

“While the market consensus of the shares as a hold is indicative of a reluctance to call a turning point just yet, the initial share price reaction to the numbers underlines some early signs of promise.”