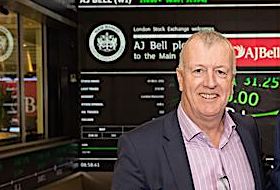 “These shares are subject to a lock-up which ends when the company publishes its interim results for the six months ended on the 31 March 2020 (subject to waiver by Numis and to certain customary exceptions).

“For the avoidance of doubt, the two year lock-up entered into by the selling shareholder at the time of the initial public offering of ordinary shares in AJ Bell, which were admitted to trading on 12 December 2018, with respect to 50% of his shareholding at IPO with Numis shall continue in accordance with its terms.

“Andy Bell will remain the company’s largest shareholder and is fully committed to the business and confident in the outlook.

“Numis is acting as sole bookrunner in connection with the placing.”