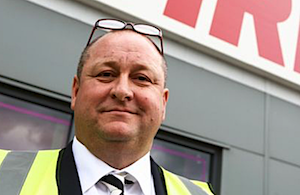 Frasers Group announced that Mike Ashley will step down from its board at the firm’s AGM on October 19, 2022, months after handing over the CEO role to his son-in-law Michael Murray.

Ashley, 57, will remain as the company’s controlling shareholder with a 69% stake, and the firm said he “will continue to be available to the board and senior management in an advisory capacity when called upon.”

Sports Direct purchased the House of Fraser department store chain out of administration in 2018.

“As part of Mike Ashley’s continuing strong support for the business and its Elevation strategy, he will provide the group with £100m of additional funding alongside and on the same commercial terms as the group’s existing unsecured borrowing facilities that were announced on 1 December 2021,” said Frasers Group.

Ashley said: “Since Michael Murray took over the leadership of Frasers Group earlier this year, the business has gone from strength to strength.

“It is clear that the group has the right leadership and strategy in place and I feel very confident passing the baton to Michael and his team.

“Although I am stepping down from the Board, I remain 100% committed to supporting Frasers and Michael’s plans and ambitions, and I look forward to helping the team as and when they require me.

“My commitment and support as a Frasers’ shareholder is as strong as ever.”

Murray said: “Mike has built an incredible business over the past 40 years and, on behalf of the board and the group, I want to thank him for all he has done.

“With our new strategy and leadership team, we are driving this business forward at pace and we are all excited for the future.

“We are grateful to have Mike’s support and expertise available to us as we continue the next stage of Frasers Group’s journey.”